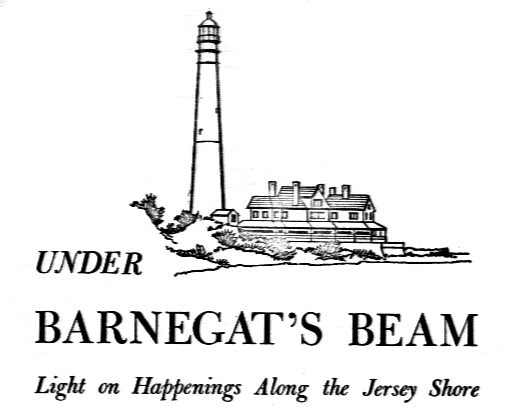 Whales and Whalers of Long Beach

The logs and journals of the early navigators from the 1600's onward comment on the great number of whales seen off the New Jersey coast. Whales are still there but in depleted numbers. The off-shore fishermen see them spouting and occasionally one may be seen by an observer outlooking at Barnegat Light.

Much has been written about whalers from New Haven and Long Island settling Cape May as early as 1640 thus creating the impression that whaling was an exclusively Cape May area industry in early New Jersey.

There was great whaling activity on Long Beach in the past A few persons can still remember the mementoes of this in the whale bone fences and gateways that once surrounded houses in Surf City and High Point. While the whalers worked on Long Beach, and for many years thereafter, the beach was strewn with large whale bones bleached white by the sun.

The Long Beach whalers had their own method of operation which differed from the way the Cape May whalers worked. Long Beach whalers did not use large vessels nor did they seek whales far from the shore. Look-out towers were manned on the beach. When a whale was sighted the crew took their boat out through the surf and the chase began. If successful the whale was towed to the beach and there cut up and tryed.

Many old maps of Long Beach show a place about six miles below Barnegat Inlet marked "Inmans," where one or more of the family of that name lived. Thomas F. Watson, in his "Annals" written in the 1820's, tells of a visit to Long Beach. He talked with old Stephen Inman, then over seventy and one of the family living at the place. He was surprised to find that Stephen and his family had never ceased to be whale catchers. They followed the occupation in February and March, generally taking two or three whales a season which averaged forty or fifty barrels of oil each.

Watson saw their lookout mast, their caldron and furnace for rendering the oil, their whale boat and many large whale bones bleaching on the beach. The famed and oft referred to "Inman Whaling Lookout Tower," according to Mrs. Emmor N. Lee, was on the beach in what is now Surf City, but almost to the Harvey Cedars line. The Inman dwelling was close by. This location is now well out to sea.

Records show that in the early 1800's a dead whale stranded on the Absecon bar, and was towed into the Inlet and beached by a group of Absecon men. They decided to process the whale and as they were so engaged they ran into difficulties. One of the Inmans from Great Swamp on Long Beach appeared and demanded one-half of the oil. He claimed that his boat had killed the whale and identified a broken harpoon in the carcass. The erstwhile whalemen of Absecon paid no attention to Inman, who then took the matter to court. The judge decided in favor of Inman and awarded not half of the oil, as he first claimed, but all of it and the whale bone as well.

Whaling along the New Jersey coast must have been extensive even at an early date as is indicated by the following advertisement from a 1180 newspaper:

WANTED: Two experienced HARPONIERS in the whaling business, to enter the first day of November next, to whom good encouragement will be given by Henry Guest of New Brunswick.

N.B.: None need apply without proper vouchers of their dexterity in the Business.

As practiced on Long Beach, whaling was a dangerous and arduous business. The endurance required of a crew was tremendous. Boats were launched through the surf on the coldest winter days. Then there was the backbreaking pull in pursuit of the whale, to be followed by a chilling wait as the harpooner sought the proper moment to make his thrust. Success or failure depended upon his skill.

The battle with the monster followed with an ever present danger from the line. Then there was the labor of hauling the line in so that a second harpoon might be thrown if possible. One small boat with its crew of five or six was pitted against a giant weighing as much as sixty tons.

If successful the captured carcass must be towed to the beach before it sank. Immediately the whale was cut up and rendered in order to secure the valuable oil. The average useful life of a whaler was about twelve years, with few caring to follow the trade because of the disabling injuries.

Whalers lived at the upper end of old High Point. When Harvey Cedars had a whaling station it is believed to have been manned by Norwegians. It is a matter of record that the open iron furnace and huge kettles used for rendering the blubber were stored the year round on upper Long Beach. They were there for many years after all whaling activity had ceased.