From The Arkansas City Daily Traveler

Disappeared From Topeka, Kansas, on Saturday Last.
Called on Her Husband's Parents in Denison. Coming There From Tulsa.
Declined An Interview.

Denison, Texas, Nov. 8. Mrs. Elmer Inman, wife of the returned parole inmate at Lansing, and the daughter of former Warden J. K. Codding, who disappeared from Topeka Saturday, after failing to secure a pardon for her husband, arrived in Denison last night, it was learned today. She arrived here from Tulsa, and called upon her husband's parents, Mr. and Mrs. J. F. Inman, this morning.
Efforts to interview the Kansas woman were unsuccessful.

Topeka, Nov. 8. The marriage of Elmer Inman to Miss Lavona Codding, daughter of former Warden J. K. Codding, of the state prison, was illegal, Judge C. W. Smith, executive clerk to Governor Allen, asserted today. His opinion is based on the ground that the convict was not in possession of citizenship rights at the time of the marriage at Holdenville, Oklahoma, August 25, 1921.
Judge Smith declared that the marriage could be held under the Kansas laws as nothing more than a common law contract.
Inman, who was serving a sentence of ten to 21 years for complicity in a jewel robbery at Arkansas City, is back in prison for violation of his parole. It was while he enjoyed liberty under a temporary parole that Inman and Miss Codding were secretly married.
The love which had developed while Inman served as chauffeur for Warden Codding apparently was successfully hidden by the convict and the warden's daughter. When Mrs. Inman pleaded with state officials last Wednesday, it became known today, she requested that her marriage be kept from her parents. She told Judge J. A. McDermott, of the industrial court, who as county attorney of Cowley county originally prosecuted Inman, that the only member of her immediate family who knew of the marriage was a brother, Harold, at Burbank, Oklahoma. This brother, Mrs. Inman is reported to have said, opposed the marriage.
State officials familiar with state prison affairs today talked freely regarding Inman and the privileges he enjoyed while serving his prison term.
"Inman seemed to enjoy every possible privilege which could be extended to a prisoner," said Harvey Henney of the state board of administration. "Warden Codding took a great interest in him. Inman seemed wonderfully attentive to Mrs. Codding, who was a very sick woman much of the time. He took her for many drives. I don't believe there was ever a suspicion, though, that a love existed between Miss Codding and Inman although he frequently drove her to Kansas City, where she was employed."
Judge Smith frequently observed Inman when he met with the prison board.
"Once, after I received a revised history of Inman's case, I told Warden Codding that he would miss his man and his car some day if Inman failed to obtain a parole," said Judge Smith. "The warden believed Inman had been 'jobbed.' He showed great interest in his case.
"I believe it was more a sympathetic affair which developed into love on the girl's part. She asked on various occasions when we were going to give Inman his chance. But I don't believe she showed more interest in his case than in parole applications for several other men."

Leavenworth, Kans., Nov. 8. The courtship which culminated in the marriage of Elmer Inman, serving a sentence in the Kansas state prison, and Miss Lavona Codding, had its inception here. Inman was acting as chauffeur to J. K. Codding, the young woman's father, who was until recently warden of the Kansas prison. After being received at the prison under sentence, Inman, who is now once more in the Kansas prison because of alleged violation of parole, worked for awhile in the prison coal mine. Then he was made Warden Codding's chauffeur. It was while acting in this capacity that he became acquainted with the warden's daughter, who is now Mrs. Inman.

Sold Jewelry While An Inmate

In addition to stealing the motor car, for the theft of which he is under indictment now in Oklahoma, Inman was held on another charge of using the mails to defraud. It is said that he had dealings with a Kansas City jewelry firm and that this firm consigned to Inman diamonds Of the value of $1,000. These he is said to have sold for $300 and made no settlement with the Kansas City firm. It is understood that a brother of Mrs. Inman came to his rescue and smoothed this matter over. Further assistance is said to have been denied when he was charged with transporting a stolen motor car.
Inman has the reputation also of having dealt extensively in jewelry while an inmate of the prison. He is said to have worked on a commission basis with the Kansas City firm with which he had business transactions while in business in Arkansas City. This is accepted as the source of much jewelry he is said to have disposed of around Lansing, although others hold to the theory that the articles sold were part of the Arkansas City loot.

Declares She Believes Her Husband Innocent of Crime.

Denison, Texas, Nov. 9. "I believe Elmer Inman is innocent of the charges of which he was convicted." Mrs. Elmer Inman, daughter of J. K. Codding, former warden of the Kansas state prison, declared to a newspaper reporter here last night. She married Inman, a paroled Kansas prisoner, at Holdenville, Oklahoma, last August. The wedding "came about suddenly but you will have to ask science why I did it." she said. Inman has been returned to prison for alleged violation of his parole.
Mrs. Inman said Inman did not "make love" to her while he was in prison nor while he was acting as her father's chauffeur. She did not express surprise when shown a Topeka dispatch quoting Judge C. W. Smith as declaring her marriage illegal. She expressed regret over publicity given a "strictly personal" affair.
"I have not informed my father where I am because I do not think it necessary." she said, adding she had no plans for the future and would remain in Denison indefinitely. She is visiting at the home of her husband's parents, Mr. and Mrs. B. F. Inman.

From "History of the Tulsa Police Department"

Chapter 21
The Gangster Era Fred Barker One of the most infamous gangs of the era was that of Ma Barker, and her sons Fred, Arthur, Herman, Loyd and James. Ma Barker, in reality, was Arizona Kate Barker. She married George Barker whom she left in Missouri when she came to Tulsa and took up residence at 401 North Cincinnati Avenue.
As youths, the Barker brothers and seventeen other youths comprised the Central Park gang at Sixth Street and Peoria Avenue. The group perpetrated small-time robberies and burglaries. As they grew to adulthood, their crimes expanded to bank robbery, kidnapping and murder.
Ma Barker's house was a stop-over place for many criminals. She became the matriarch of the criminal group and ruled with an iron fist. Although she was credited for masterminding all of their crimes, the brains who actually planned each venture was Elmer H. Inman. 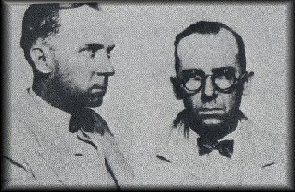 Other gang members included Glen Leroy Wright and Raymond Karpavioz, who shortened his name to Alvin Karpis. He often used the alias of George Haller. Karpis stayed at 6 East Haskell Street. The Tulsa officers raided Karpis' residence and Barker's home but the suspects eluded them after a gun battle.

Read more about the Barker gang.
EVOLUTION OF AN OUTLAW BAND: THE MAKING OF THE BARKER-KARPIS GANG and
"Tri-State Terror" The Saga of Wilber Underhill in Oklahoma