Indicates a link to their page in the database.

The Salt Lake Tribune January 02, 1994, Page: B9
Luella D. Steven
Luella Drakeford Steven, age 77, died December 31, 1993 at her home in Salt Lake City.
Born June 8, 1916 in Salt Lake City to Lorenzo and Rebecca Anthony Drakeford. Married Douglas M. Steven on September 4, 1936 in Salt Lake City. Marriage later solemnized in the Salt Lake LDS Temple. He preceded her in death January 2, 1964. Active member of the LDS Church.
Formerly employed by Deseret News Press, LDS Church Office Building and the Salt Lake School
District. Luella was a very giving person and loved to be of service to others, particularly the members of the 25th Ward.
Survived by three daughters, Kathleen (Floyd) Inman, Sharron (Max) Griffin and Connie (Ron)
Hamblin; 11 grandchildren and eight great-grandchildren; a sister, Erma Strickland of Florida. Preceded in death by a daughter, Marjorie "Toby" Bridge; and two sisters, Rhea Booth and Edith Graham.
Funeral services Tuesday, January 4, 1994, 1 p.m. at the Salt Lake 25th Ward, 351 Navajo Street.
Friends may call on Monday evening from 6-8 p.m. at the Larkin Mortuary, 260 East South Temple, and at the ward from 12-12:45 p.m. prior to services. Burial, Wasatch Lawn Memorial Park.
In lieu of flowers, the family suggests donations be made in her name to the American Diabetes
Assoc-Utah, 340 East 400 South, Salt Lake City, UT 84111.

The Salt Lake Tribune - March 27, 1994, Page: B11
Fred A. E. Boeckmann
Friedrich Alwin Erich Boeckmann, age 80, passed away March 25, 1994 at his home in Salt Lake City, Utah.
Born March 1, 1914 in Luebeck, Germany to Friedrich and Auguste Hilgendorf Boeckmann. He
married Friede Wilhelmine Elisabeth Meyer, December 15, 1942 in Luebeck, Germany. Marriage
solemnized in 1962 in the Logan LDS Temple. He was a plumber in Germany, worked for a plumbing supplier in Canada, and later worked for Sears. He and Friede served an LDS mission to Duesseldorf, Germany from 1980-1982.
Survived by: wife, Friede of Salt Lake City; sister, Ursula Boeckmann of Luebeck, Germany; children; and their spouses: Inge and Larry Johnson of Brigham City, Utah; Traute and Lynn Cross of Bountiful; Rosemarie and Larry Brown of Sandy; Ruth and Elmer Inman of Salt Lake City; Michael and Julie Boeckmann of West Valley City; Anne and Paul Gubler of Las Vegas, Nev; 22 grandchildren, four great-grandchildren; preceded in death by brothers: Hans and August Boeckmann of Luebeck, Germany.
Funeral services will be held Tuesday, March 29, 1994, 11:00 a.m. at the Salt Lake Liberty Stake, 2nd Ward Chapel 704 South 500 East; where friends may call one hour prior to services. Interment Redwood Memorial Estates.

The Salt Lake Tribune - May 05, 1994, Page: B4
Deloris (DeDe) Holt White
FRUIT HEIGHTS--Deloris (DeDe) Holt Johnson White, 65, passed away Wednesday, May 1, 1994 in a Salt Lake City hospital.
Born August 7, 1928 in Tooele, Utah to Della Strasburg and John Moroni Holt. She was an identical twin to her sister, Dorothy Phillips. She married Robert Carl Johnson; later divorced. They had three children. She later married Fred Tanner White June 21, 1964, in Las Vegas, Nev.
She was a kind and loving person. Her keen sense of humor saw her through many sad
disappointments in her long fight with pain and finally total disability.
She was a faithful member of the Church of Jesus Christ of Latter-day Saints. She loved the Lord and made Him her daily companion and source of strength. Her children were her life, being totally
dependent upon her.
She is survived by her husband, a daughter, Lynda Johnson, both of Fruit Heights; and two sons,
Martin Johnson, Pleasant Grove; and Lester Johnson, Draper; four stepchildren, Patricia Arnoldus,
Karen Mascarenz, David White and Kathleen McNiel; 22 step-grandchildren and 28 great- grandchildren; two sisters, Thelma Inman, Salt Lake City; and Erma Petty, West Valley City;
many loving nieces and nephews.
Her parents, two brothers, Veldon Holt and Melvin Holt; two sisters, Elnor Whittaker and her twin, Dorothy Phillips, preceded her in death.
Graveside services will be Saturday, May 7, 1994, at 12 noon, at Valley View Memorial Park, 4400 West 4100 South, WVC. Friends may call Saturday at McDougal Funeral Home, 4330 South Redwood Road, 10:45 a.m.-11:45 a.m. Funeral directors, Lindquist's Kaysville Mortuary.

James W. Inman
James William Inman, 72, died at his daughter's home in Jensen, on Jan. 30, 2000. He was born Aug. 16, 1927 in Gallatin, Tenn., a son of Leslie Walter Inman and Lillian Dicas Inman. He married Betty Yvonne Pavey on Nov. 26, 1948 in New Albany, Ind. She died Dec. 26, 1986.
James was a machinist. He was a veteran of WWII and served in the United States Navy. He was a member of the Masonic Lodge, the Elks Lodge and the American Legion.
He is survived by his daughter and son-in-law, Deborah and James R. Elliott; granddaughter, Kyrie M. Elliot; brothers,
Leslie Inman and Ray Inman; and cousins, Joe and Jean Inman.

Friede M. Boeckmann passed away quietly in the early morning hours of March 22, 2000.
Born in 1918 in Luebeck, Germany. Friede was raised and educated in Germany. She also met her husband, Fred Boeckmann, there. They emigrated to the United States in 1963. Their marriage was solemnized in the Logan LDS Temple in 1962.
Friede was a loving and kind person, always available to those who needed her guidance or counsel. She had a wonderful sense of humor and a radiant smile. She was one of the naturally cheerful people who had an optimistic outlook on life. She always did her best to encourage and embrace her family and friends.
Survived by her children, Inge (Larry) Johnson; Traute (Lynn) Cross; Rose (Larry) Brown; Ruth (Elmer) Inman; Michael (Julie) Boeckmann; Anne (Paul) Gubler; brother, Reinhold (Rosa) Meyer; 23 grandchildren and 11 great grandchildren. Preceded in death by her husband Fred Boeckmann, three sisters and three brothers.
Funeral services will be held on Saturday, March 25, 11 a.m. in the chapel at Redwood Memorial Estates, 6500 South Redwood Road. Friends may call one hour prior to services for viewing.

ST. GEORGE -- Catherine Bradfield Lynn Inman, 89, passed away Thursday, August 26, 2004 in St. George, Utah. She was born April 6, 1915 in Milford, Utah, the youngest of eight children born to Thomas Henry and Catherine Smith Bradfield. She married Dwight Lynn, he preceded her in death February 2, 1947. She married Stephen P. Inman in Las Vegas, Nevada on January 30, 1949.
Catherine lived the majority of her life in Milford, Utah. Her greatest joys in life were being a wife, mother, grandmother, great grandmother and great-great grandmother.
She is survived by her husband of 55 years; her daughter and son-in-law, Janice and Roger Aagard of St. George; grandchildren, Cindy and Scott Jensen of New Harmony, Ryan and Tonia Aagard of Salt Lake City, and Norman and Brigitte Aagard of Salt Lake City; ten great grandchildren; and five great-great grandchildren. She is preceded in death by her parents, four brothers, three sisters and one great-great granddaughter.
Graveside services will be Monday, August 30, 2004, 11 a.m., Milford City Cemetery, Milford, Utah.
The Spectrum (Aug/29/2004)

Henry Fort Inman, age 88, left us on September 10, 2006.
Born May 22, 1918 at home int he countryside near Tuscumbia, Alabama. He was the son of William Wheeler and Alva Mae Fort Inman and younger brother of Stephen Inman. The family later moved to Akron, Ohio, where he attended public schools. He was in the Civilian Conservation Corps doing work in Kentucky and West Virginia. He served in the Army Signal corps from June 1940 until honorably discharged in April 1946. During his service he attained the rank of Sergeant. In November 1941 he was sent to the Philippines. He was a tail gunner in P38s until they were all destroyed. He participated in the defense of Luzon until it fell to the Japanese in April 1942. he endured the entire Bataan Death March and subsequent imprisonment from then until liberated in August 1945. He was a guard at Toole Ordinance Depot from September 1946 until receiving a medical retirement in August 1952. Later he was a school crossing guard. Henry enjoyed fishing and woodworking. He made furniture and other useful items for others. He also enjoyed traveling and visited every state except Alaska.
Henry is survived by his daughters Karen and Kristine, from his marriage to Beverly Bolinder; stepchildren: Frances (Don) Hendricks, Frank Dew, Kathy (Joe) Ortega, Linda (Earl) Reynard, from his marriage to Pearl Dew on September 14, 1962; 18 grandchildren; 33 great-grandchildren; 10 great-great-grandchildren; brother, Steve and several nephews and nieces. He was preceded in death by his parents, his wife, Pearl, and nephew, John.
The family thanks the nurses and especially the staff in the special Needs Unit at the Utah State Nursing Home for their care.
Graveside services will be Friday, Sept. 15, 2006 at 10:00 a.m. at Valley View Memorial Park, 4400 W. 4100 S. A viewing will be Wednesday from 4-6 p.m. at McDougal Funeral Home, 4330 South Redwood Rd. 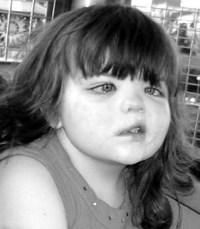 Katherine Marie Inman passed away on November 3, 2006, at her home in West Jordan, Utah. She was born on January 1, 2000 in Tacoma, Washington to Daniel and Nicole Inman. In November of 2000, she moved with her parents to Utah. In April 2001 she was diagnosed with a brain tumor and for the next five years fought it with her own wonderful mixture of bravery and humor. She was treated at Primary Children's Medical Center and was a joy to all she came in contact with. Many of the nurses recall when she was younger, she would grab onto your shirt as a "comfort object". As she got older, she became very verbal and loved to chat with everyone she came in contact with. One of Katherine's greatest loves was school, and she was able to attend three great schools. She attended Pre-school for half a year at Silver Hills, then Pre-school for a full year at Jim Bridger, and Kindergarten at Hunter Elementary. She was friends with all her classmates and was loved by all her teachers whom she adored in return. She was only able to complete a month of first grade, but enjoyed all the time she was there. When she wasn't up at the hospital, Katherine loved to play. She enjoyed arts and crafts, playing in the backyard on the swing set, reading books, helping mom cook dinner or bake cookies, playing with her siblings, and watching cartoons. Her love of Dora the Explorer was well known! She also enjoyed Rolie Polie Olie, Jo-Jo Circus and The Back Yardigans. She is survived by her parents, her brother Michael, sister Gretchen, and her new baby brother, Nathaniel; grandparents, Steve and Sue Bailey and Lonnie and Pat Inman. The family would like to express their gratitude to all the wonderful nurses and doctors who cared for Katherine at Primary Children's, especially Dr. Carol Bruggers, and the nurses in the Oncology department. A service for Katherine will be held at her home, Saturday November 18, 2006 at 6240 S. 5130 W. in West Jordan, from 11:00 a.m. till 3:00 p.m. In lieu of flowers please send donations to Primary Children's Hospital in her name. SHE WAS A BEAUTIFUL GIRL WHO WILL ALWAYS BE OUR PRINCESS. WE MISS YOU VERY MUCH KATHERINE AND YOU WILL BE IN OUR THOUGHTS FOREVER. WE LOVE YOU KIT-KAT!