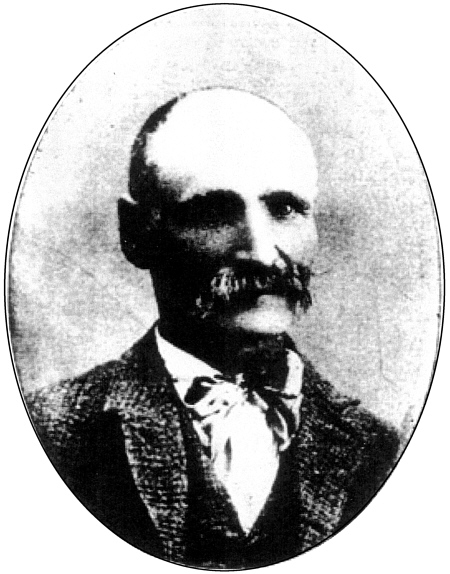 Was born March 13,1834, on Prince Edward Island, Canada. Went to Maine when nine years of age. Enlisted in Company B of the 16th Maine regiment and was in the service one year and one month. Took out his naturalization papers in 1864. After the war he returned to Maine and on November 14, 1867, married Theresa Inman. During the fall of '69 he came to Wisconsin and lived for three years at Oshkosh. He then moved to Shawano where he lived for five years. Moved to Chippewa Falls and after living there for two years moved to his present home, in what was then Chippewa (now Sawyer) county - Sec. 4-38-6.  Moved his household goods to this place on March 12, 1878, and his family followed in April. Bought this place the following fall in company with W. E. McCord and A. J. Hayward. They bought it from William and Samuel Hall, and for many years it was known as the Hall Stopping Place. Woodsmen were constantly going up and down the Chippewa river and this place, like many of its kind, had a good trade in those days. Mr. and Mrs. Raynor have kept as many as eighty-five over night and frequently they have given dinner to one hundred and fifty men.

Mr. Hayward soon sold out his interest to Laird & Norton and later on Mr. Raynor came into full possession of the property.

In an early day, several lumbering camps were located near Mr. Raynor's place and 20,000,000 feet of logs have been put into the Chippewa river in a single winter within three or four miles of his residence. During the summer time for the first four or five years, supplies were transported from Chippewa Falls by team to Big Bend, thence taken by boat to Mr. Raynor's place. In winter the entire distant could be made by team. Mr. Raynor spent the two winters '76-7 and '77-8 in the woods.

At this writing, Mr. Raynor is serving his fifth term as a member of the board of school directors of the town of Hayward,  being elected to that position from sub-district No. 3,  in '87, '98, '99, '00, '01. At the annual meeting of the board held on July 1o, 1899, he was elected vice president of the board and served m that capacity for one year.

Has three children - Elizabeth Ann (Mrs. Henry Crawford), Ella (Mrs. Joseph Crawford), and Maggie (Mrs. Joseph Buckwheat) all of them having homes not many miles from their father's residence. His post office address is Hayward, Wis.

On the 5th day of June, 1884, Alfred Raynor, who was living on Sec. 4-38-6, appeared before the board of school directors and asked that a school be provided for his three children as there were no other children of school age within four miles of his residence. The board did not see fit to grant his request. In December, 1885, Mr. Raynor went to Chippewa Falls and employed Lena McGilvray, on his own account, to teach his children for three months. During the following January some of the members of the board visited the school and decided to relieve Mr. Raynor of all financial responsibilities for the school. The school was held in one of the rooms of the Raynor residence. It closed early in March, '86, and had an enrollment of three pupils.

At the March, 1886 meeting of the board it was decided to build a school house for these pupils. The building was accordingly erected on the right bank of the Chippewa river about a quarter of a mile above Mr. Raynor's residence. The carpenter work was done by C. C. Brown. On February 16, 1888, this building was burnt. By order of the school board at its meeting held during the following March another building was immediately erected a. few rods above the present residence of Henry Crawford. This school has since been officially known as the Crawford school but the newspapers have applied the names of Raynor, Lessard or Crawford, depending upon which of these three gentlemen happened to be the clerk of the sub-district.

We gave above February 16 as the date of the burning of the Raynor school house because that was the date given us, but we are inclined to believe that it was one week earlier, or on February 9, 1888.